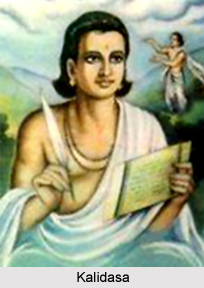 The principal characters of Malavikagnimitra include Malavika and Agnimitra. The play is a five-act drama based on king Agnimitra’s love for a beautiful girl Malavika. Approximately two thousand years ago, south-west India was ruled by a dynasty of Shunga kings. Agnimitra was the most illustrious among them. Vidisha was the capital of his kingdom. He had two queens, namely Dharani and Iravati.

Dharani was the elder of the two and was known to be matured and broad-minded. Iravati was shrill and a rather irritated. Both however were equally committed to the king and he too, loved them greatly. Dharini had a brother named Virasena.

The king had ordained him a commander of one of the boundary citadels. Virasena, on one such occasion, encountered a pretty young girl, Malavika who had an artistic knack of the eye. He sent her as a present to his sister Dharini with the desire that after suitable grooming, Malavika would be groomed into an accomplished dancer. Dharini therefore posted her under the charge of an experienced and qualified teacher Ganadasa. One day, Agnimitra visited Dharini and he came across a freshly painted picture which portrayed the queen surrounded by her attendants and maids, with Malavika sitting close to her.

Smitten by her beauty, the king enquired her name from the queen. Dharini however dodged the question, but when the king persisted, the queen’s younger sister, Vasulakshmi who was still a minor, blurted out that she was Malavika.

However, the king’s curiosity to perceive Malavika in person grew with the queen’s apprehension to keep her away from him. Meanwhile, a messenger from the king of Vidarbha conveyed a letter from his master which hugely troubled king Agnimitra.

The state of Vidarbha was situated in the neighbourhood of Vidisha. Its king, Yajnasena was envious of Agnimitra’s growing power and popularity. His cousin, prince Madhavasena was, however, a friend to king Agnimitra. He wanted to marry his sister to the king. Yajnasena was opposed to the proposal. He thus imprisoned Madhavasena, his own cousin, when the latter accompanied by his sister, was proceeding to Vidisha, to offer her in marriage to Agnimitra.

The young girl had however melted away in the confusion that succeeded the prince’s imprisonment. The letter now brought by the messenger was in reply to that communication. The king of Vidarbha had stated that he would comply, if Agnimitra agreed to release his brother-in-law, Mayurasachiva, who had been imprisoned earlier by him.

This negotiating offer was not acceptable to king Agnimitra. 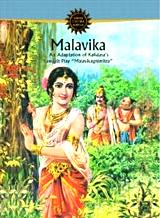 Infuriated by the reply brought by the messenger, he issued orders to his commander Virasena, to move his army against Yajnasena, so he could be taught a lesson for his act of imprudence. Ka,idasa, in the meantime, was as keen as ever to have a glance of Malavika.

He had taken the Vidushaka, his court-jester, into confidence regarding the matter. Actually the Vidushaka, not only entertained the king, but also acted as his adviser and assistant in his private affairs. The king had asked him bby machinate a plan by which he could meet Malavika. When questioned by the king on the subject, Vidushaka informed him that in order to fulfil his desire; he had not only hit upon an idea, but had also taken introductory action to give it a convenient shape.

The task for teaching dance to Malavika was assigned by queen Dharini to Ganadasa, a preceptor well-versed in kalidasw art of dancing.

There was another esteemed dance teacher, Haradatta, in the king’s court. Vidushaka had instigated both the teachers against each other and consequently there was an exchange of raging words between the two – each claiming authority over the other in the domain of their art. Apparently, at the suggestion of the Vidushaka, both the preceptors portrayed themselves before the king with the appeal that he might assess their knowledge and skill in person and give his decision about their comparative worth.

For this purpose, both the teachers were to showcase dance performances of their respective pupils. The king, however felt that it would not be prudent for him to act as the only judge.

He was known to be favourably inclined towards Haradatta and could thus be suspected of partiality if the judgment went in his favour. In the palace, there lived a female Buddhist ascetic, Kaushiki, who was thoroughly knowledgeable of various techniques of dancing and acting. The king suggested that she and the queen should also watch the competition and the matter be decided in their presence. Both the queen and Kaushiki were accordingly summoned and the issue was explained to them.

Knowing the king’s mind, queen Dharini conveyed her opposition to the idea of competition, as she was not favourably disposed of the display of Malavika’s dance performance before her husband. Her protest, however, went unheeded as Ganadasa himself insisted on proving his dominance over his rival through presentation of his pupil Malavika on stage. The matter was finally settled when at the king’s suggestion, Kaushiki agreed to judge the excellence of the competitors subject to the condition that the king would also be present there to help her in hitting an accurate decision.

It was also decided that Ganadasa, being the elder of the two teachers, should be allowed to present her pupil first. When Malavika appeared on stage, she was dressed to the bare minimum, to ensure that movement of all her limbs during the dance was gracefully displayed. She appeared to be a flawless beauty. When Agnimitra had first seen her in picture, he had felt that no person could have as perfect a figure as painted by the artist.

He was completely dumbfounded. The grace of movements of Malavika’s limbs and the registration of fast changing emotions on her face, made Malavika’s presentation exceedingly fascinating.

When the performance ended, Malavika was ready to leave. Ganadasa, however, asked her to stay a little longer to know if her display was without any flaw. At this, the court-jester said that he had noted an omission, but he would express it only after the lady Kaushiki had kalldasa her opinion.

Kaushiki replied that the presentation was perfect. The king was also all praise for it.

Ganadasa now turned to Vidushaka to find out the omission that he had observed. The court-jester, a Brahmin and a known glutton, pointed out that the inaugural display of skill by Malavika should have been introduced by offer of feast to a Brahmin and that he had been disregarded in this case. Ganadasa, however, explained that Malavika’s performance was not her inaugural display of skill in dancing and that nothing was due to the Brahmin on the kalidasaa.

Now it was Haradatta’s turn to present display of his pupil’s proficiency in the art. However, by this time, breakfast for the king was declared. The performance was, therefore, deferred to the next day. The king, having achieved his intention, had lost interest in a presentation to be presented by a person other than Malavika.

The exhibition of art by Hardatta’s pupil on the next day was also praiseworthy, but the grace of Malavika’s movements, settled the case in favour of her preceptor, Ganadasa. Agnimitra was now passionately in love with Malavika. He incessantly thought of her and was seeking an opportunity to meet her. The Vidushaka, ka,idasa his skill, had enabled the king to watch her from close quarters and that too under the best of conditions.

He, therefore, again sought Vidushaka’s good advice to convey his intensity of feelings malavikagnmiitra maybe arrange a rendezvous between the two. Vidushaka chose Bakulavalika, a close friend to Malavika, for the kaoidasa and instructed her of the king’s message to be delivered to the young lady.

Meanwhile, Iravati, the younger queen, had conveyed to the king, through one of her maids, malaikagnimitra ardent malqvikagnimitra to share a ride with him in the swing in the pleasure garden. Agnimitra, languishing for Malavika’s company was in no mood to submit yb the request, but, Vidushaka advised him not to say ‘no’ to Iravati. The king, therefore, accompanied by the Vidushaka proceeded to the pleasure garden.

While waiting for Iravati there, they saw Malavika standing at a short distance. The king’s heart palpitated with anticipation. He, however did not want to reveal himself at once. The king and the Vidushaka, therefore, concealed themselves in a bower from where they could watch the dealings, without being noticed.

Malavika appeared to be lost in deep thought. It seemed that she too had malavikagnimmitra her heart to someone; and the king’s wishful thinking led him to conclude that he malavikavnimitra perhaps was the privileged person in this case. He, however, did not want to make the next move till he was sure of her feelings towards him.

From the conversation that ensued between her and Malavika, it emerged that the Ashoka tree in the garden had not flowered regardless of the advent of the spring season and according to traditional belief it had to be struck ceremoniously by a gorgeous woman with her foot embellished with jalavikagnimitra anklets, to make it to bloom. Accordingly, Malavika had come to the pleasure garden and Bakulavalika had followed her with lac for dyeing her feet and putting on anklets.

While embellishing Malavika’s feet, Oalidasa discreetly conveyed the king’s message to her. At first she could not believe her ears, but when the fact that the king had fallen in love with her at first sight, was elucidated to her in clearer terms, her joy maoavikagnimitra unbounded.

Iravati, by that time, had also reached the pleasure garden to share a joy ride with her husband in the swing. Looking for the king, accompanied by her maid Nipunika, she also arrived at the spot where Malavika was getting ready to kick the Ashoka tree.

They however, stood unseen by a corner. Malavika’s presence in the garden at the time when the king was also expected there, made Iravati anxious about her husband’s intentions.

Her fear was somewhat relieved when she learnt that Malavika had come there to obey queen Dharini’s command.

Iravati however, got infuriated when Bakulavalika communicated the king’s love message to Malavika; and soon after Agnimitra suddenly rushed to her from his hiding place in the bower and took her by her hand to personally assure her of his determined devotion. The queen could control herself no longer. She had caught the king red-handed and was in no mood to ignore the serious slip on the part of her husband.

Malavika and Bakulavalika were in a state of utter confusion and they left the place immediately.